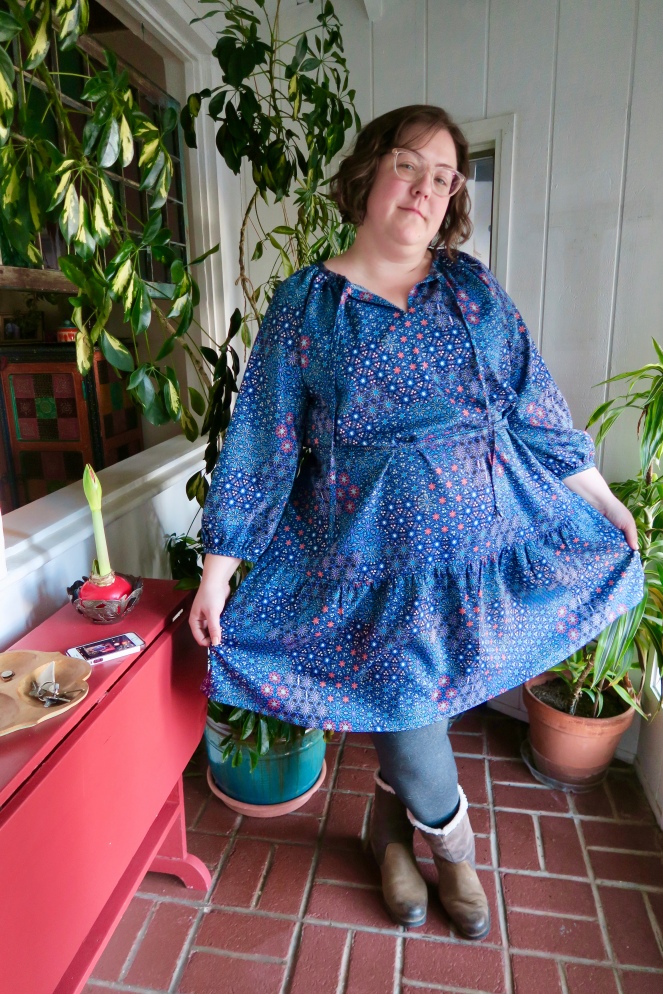 When True Bias announced they were updating their size range, the Roscoe Dress was at the top of my list for garments I had been dreaming of making! I was too busy to test this pattern during the testing phase, but you better believe I bought it the minute it was available for purchase. I can’t wait to see which pattern is next! 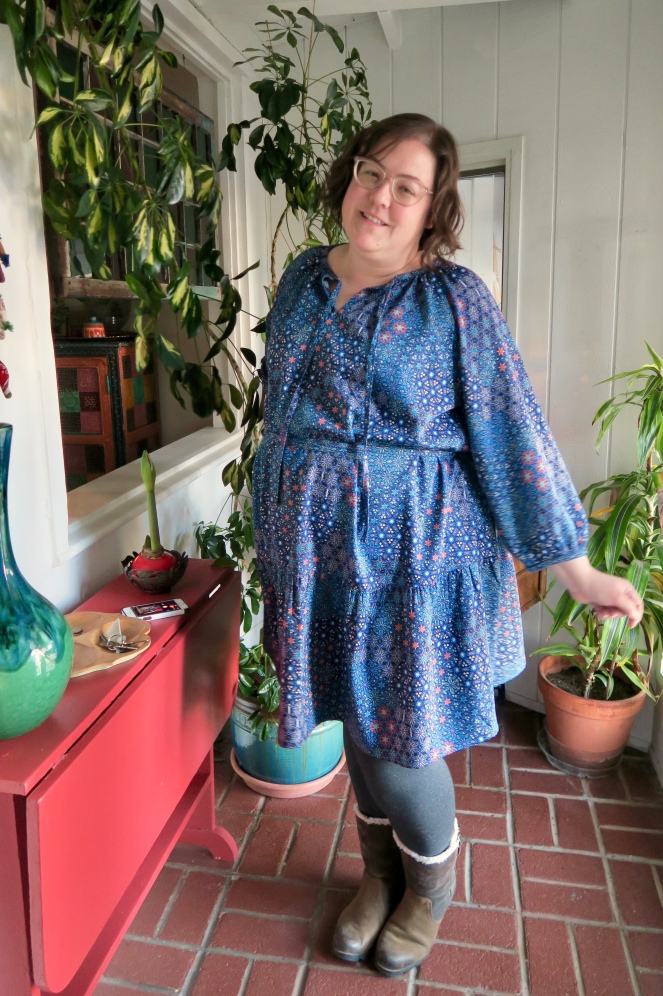 I had a lot of grand sewing plans over the 8 days I was taking off from work over the holiday season, but unfortunately I got sick and the only thing I managed to sew was this dress. Thats how badly I wanted to make it! 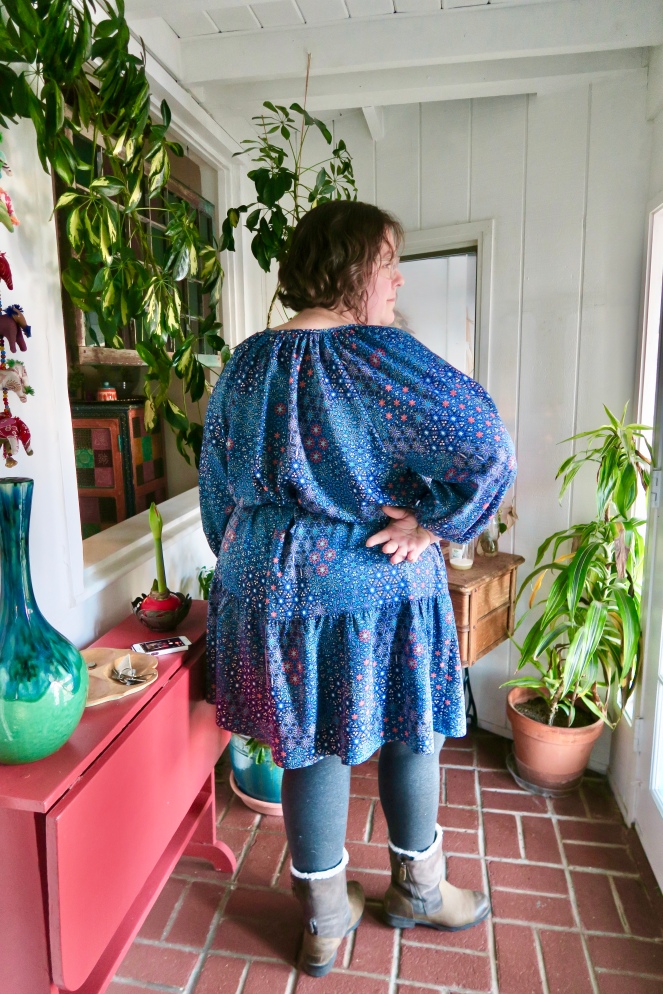 I had initially stalled out on my fabric choice, but I found this deep stash fabric and it ended up being the perfect pairing! This was sold years ago at Joann’s as a Nicole Miller design, I recall that several people purchased it, though I can’t remember what everyone else used it for now. I swear it was sold as a rayon, but it is definitely at least MOSTLY poly as its pretty springy and didn’t hold a press very well. Fortunately its hasn’t been too staticky/clingy yet. It does have a big flaw in the print but I’m hoping the print is too busy to really notice. 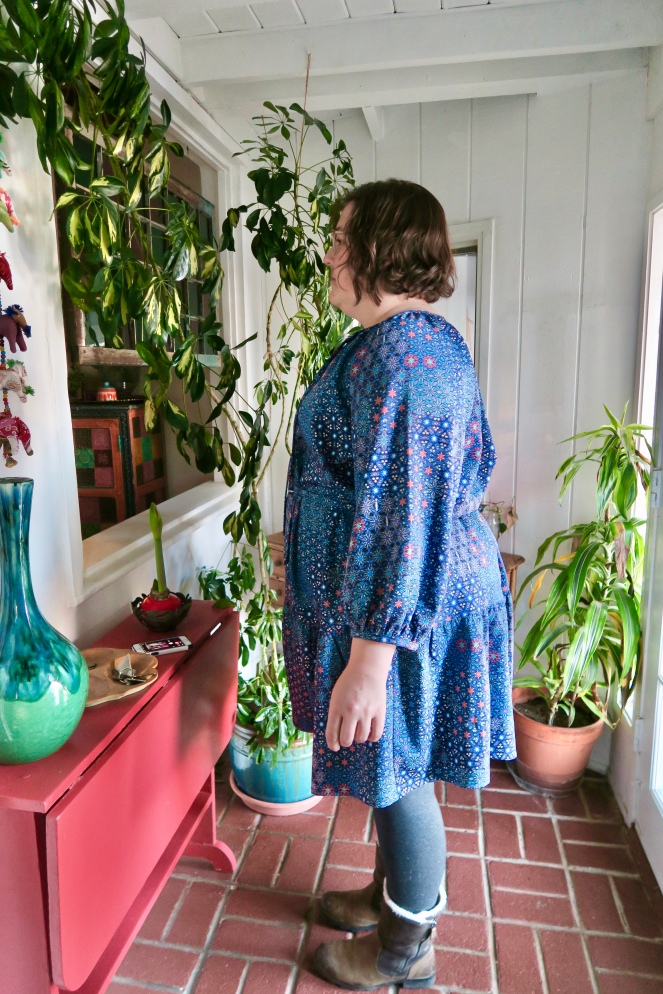 Based on some recommendations I saw mentioned on Instagram stories (so I can’t link to them), I ended up sizing down and cutting an 18-20-22 size for this version. Per the size chart, I should have cut a 20-24-28. I’m really happy with the fit and it was so nice not to have to fuss with anything. Once again, I give True Bias’s new size range a two thumbs up on the drafting! 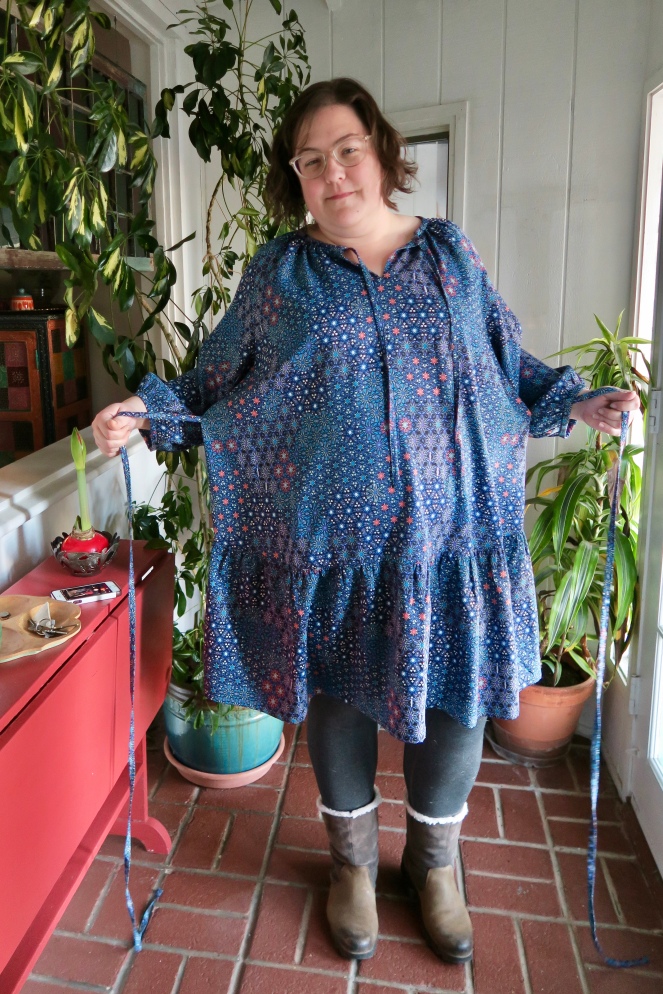 Because this fabric has so much body and stands away from the body bit, as opposed to say a rayon challis, I decided I probably wouldn’t wear it unbelted and ended up making a thin belt that I sewed into the side seams. I really hate keeping up with thin, self fabric belts, I tend to lose them quickly so sewing them into the side seams helps with that a ton. I would like to try this dress in a fabric that falls closer to the body in the spring and see if I like it unbelted. 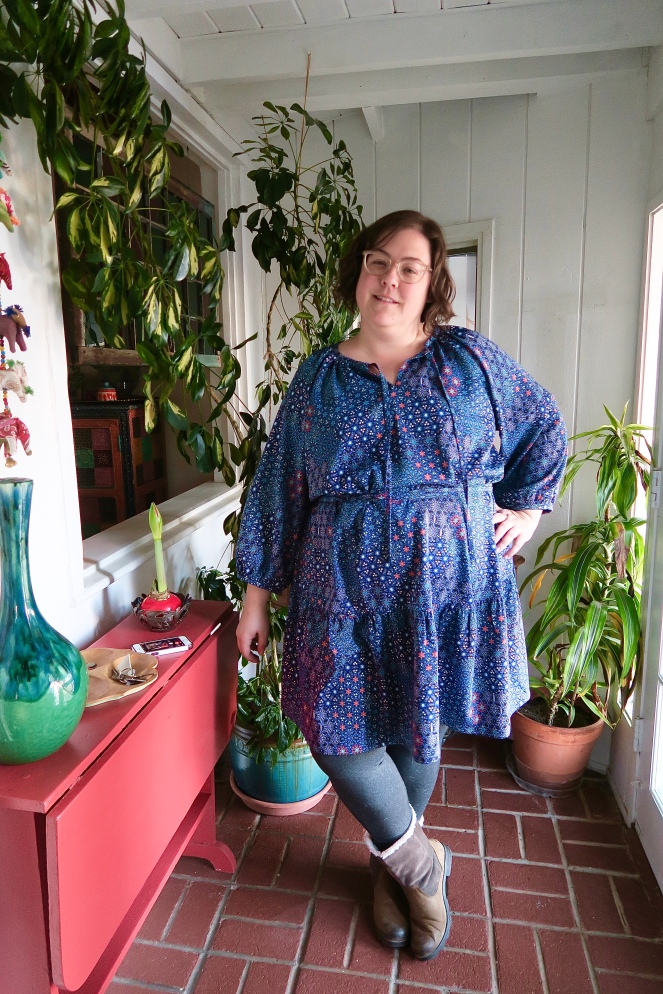 The only other change I made to this pattern, beside sizing down, was to use the lower tier from view C, which is slightly longer than the tier that is designed for the view I made (view B). I suspected I was going to want to belt this version and you lose quite a bit of length when you belt a dress, so I wanted to make sure it was long enough. I’m really happy with the length, but if I do sew a version that isn’t meant to be belted, I think I will use the shorter lower tier. However, I do think my next version will be a blouse! 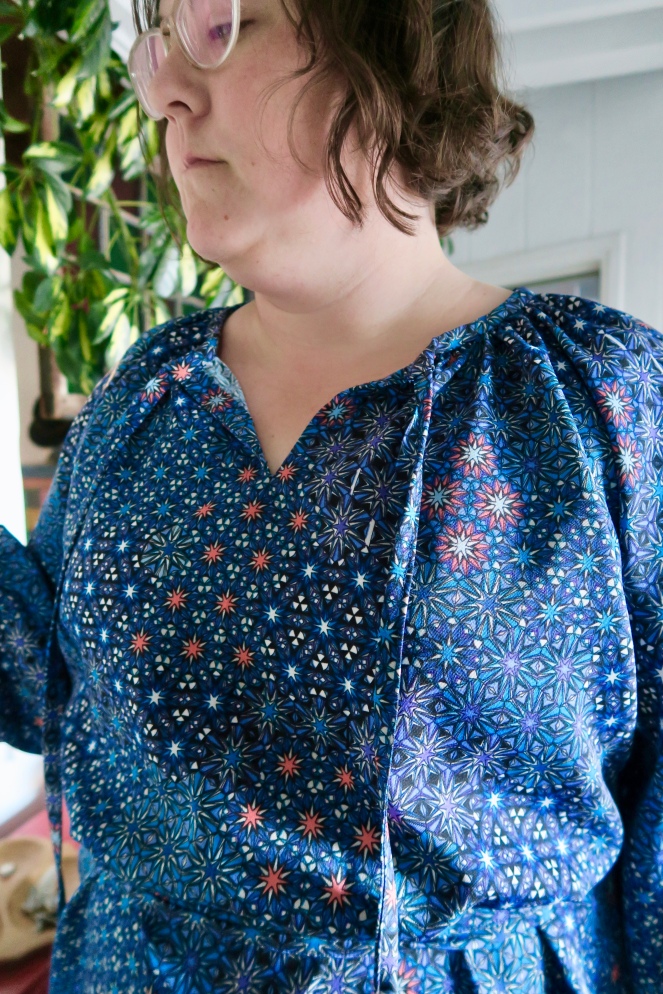 I was a little worried about all the gathering on this being super tedious, but it wasn’t too bad at all, especially because the rest of the construction is pretty quick with the raglan sleeves. The neckline facing was also very straightforward, though I was lucky that this fabric didn’t fray or I think I would have had a struggle with the neckline and sleeve binding. I think my biggest piece of advice for this dress is that with all the gathering and binding, try to avoid a fabric that is prone to fraying. 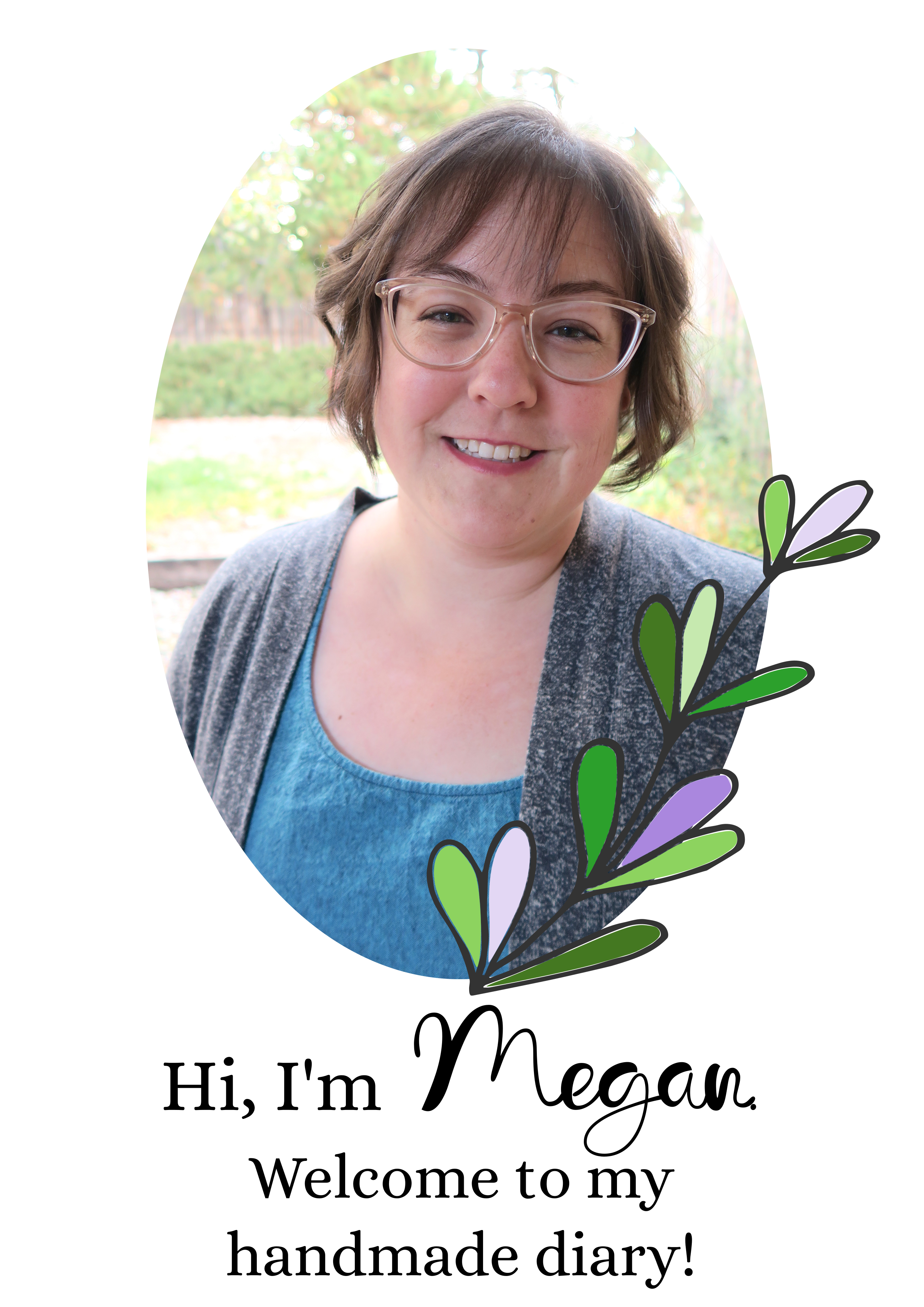