Over the summer (hence the old photos), I got the bug to find a pattern for a close fitting, knit, tank dress that could be used for layering. I figured my options were to either hack the Cashmerette Concord Tee or seek out something new. Deer and Doe had recently rolled out their new size range (which, TBH, wasn’t that great as it stopped at 48″ hip) and I hadn’t tried any of their patterns yet, so I thought I would give the Givre Dress a go. 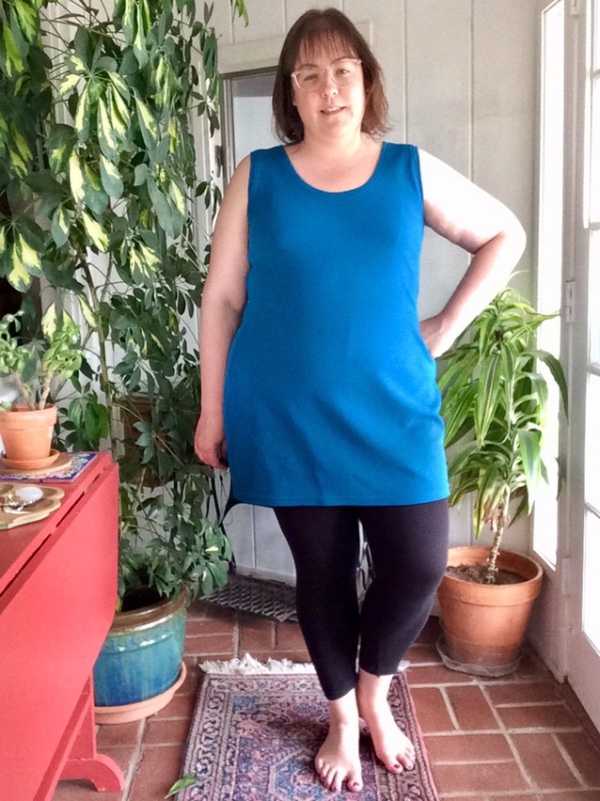 Though D&D recently expanded the size range on this pattern, I can’t find any pics of their curvy model in it, which should have been my first hint. I think she is modeling it here in the product pictures for a different pattern, but I can’t be sure. Either way, the shoulders are obscured, and that is where I had the biggest (unexpected) fit issues. 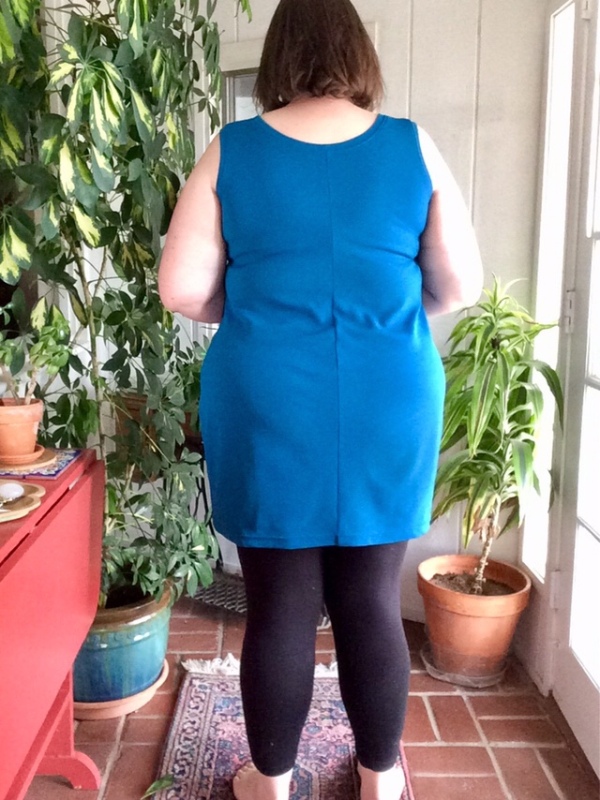 After I printed it, I had to grade it up two sizes through the hips. I cut a 52 at the bust (the largest size of the pattern), then graded up to a 54 at the waist and a 56 at the hips. I can’t remember exactly, but my measurements then were similar to what they are now  (45-41-52) and the sizes I chose corresponded. I did add a center back seam and shaped it. This was to lessen the shaping on the side seams since I have such an extreme difference between my bust and hips. I also hemmed it about 8″ shorter than drafted. This is the result after my first attempt in a liverpool knit from LA Finch Fabrics.

I still had some fit issues through the back, though this wasn’t a surprise to me because of my body shape. What I was disappointed with was the shape of the shoulders and neckline. I personally think there is a bit of a grading issue here, or perhaps its a situation of grading a pattern past its usable size range. The shoulders came up super wide, the neckline wasn’t as gracefully scooped as the photos they show on much smaller models. I just didn’t feel the style lines in the largest size were as depicted in the line drawing and the modeled photos on the website. And I did some narrowing of the pattern before I took these photos, it was even wider and more awkward than this when I first put it together. 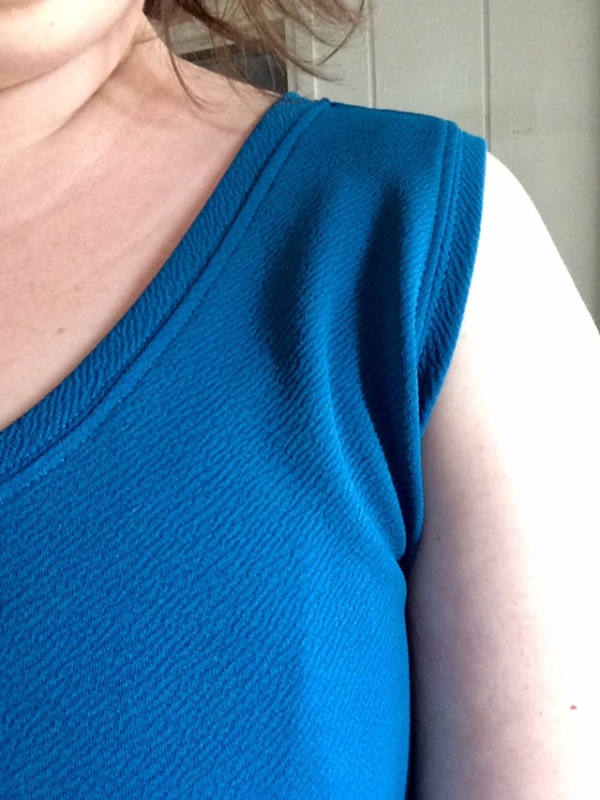 After the initial muslin in a liverpool knit, I went back in and took about a 2″ swayback adjustment through the back. I did this by cutting the pattern at the waistline and overlapping the pieces by about an inch at center back on an angle with no change at the side seam. As you can see below, this type of adjustment does throw off the grainline of the bodice. I haven’t had an issue with that, just be sure to maintain the grain line on the bottom half perpendicular to the hem if you attempt this adjustment. I’ve seen a few tutorials or comments around the interwebs claim that if you remove length at the swayback, you need to add it back below the waist to maintain the total length of the garment at center back. While I understand the mathematical reasoning behind this, the fact remains that my total back length is shorter than my total front length, due to my posture, so I don’t add any length back in. 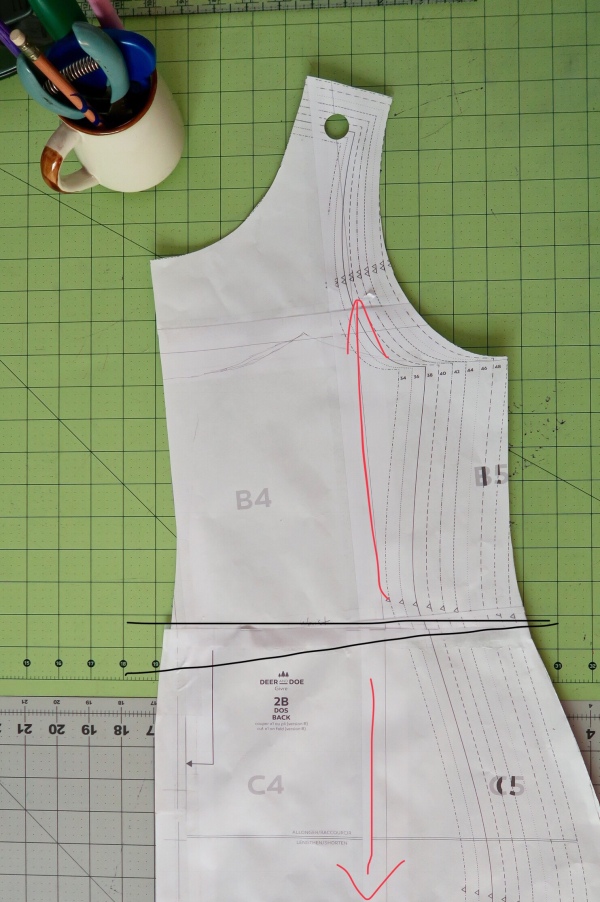 I also graded the pattern down to a size 50 through the bust and a 48 above the bust, which narrowed the straps a little but still didn’t quite achieve that “tank dress” look I wanted. It’s still wide through the shoulders and I just don’t think the neckline looks right. It’s unresolved- somewhere between a crew neck and a scoop neck, but not actually achieving either.

I made this version in a very thin rayon knit, so it will only be used for layering. It went on many hikes this summer over leggings and under a sun shirt, it makes a great tunic to just cover the bum when wearing leggings. 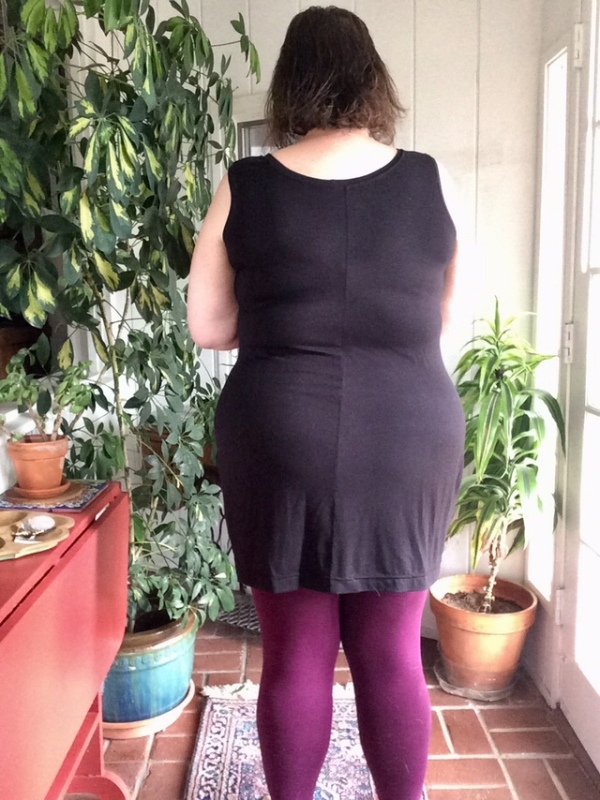 I’m happy with the fit through the back now, but I still don’t think this is exactly what I was hoping for with this pattern. However, it did made a perfect template for hacking… stay tuned!

Size: See all the sizing details above! Lots of alterations

12 thoughts on “Fitting the Deer and Doe Givre Dress”